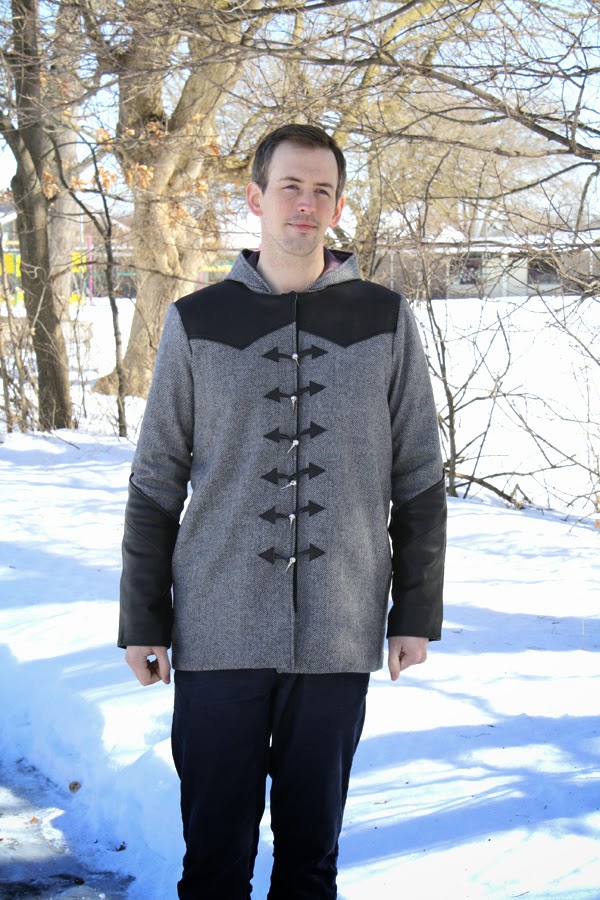 Making the Albion coat was a bit of a tortured experience for me, and the whole process was riddled with issues that I hadn't planned on having to deal with. I began by starting the sewalong almost 20 days late. I had held off on starting because when I first decided to participate I had settled on making the coat out of black and white herringbone wool, and there wasn't any. I either visited or called every fabric store in Southwest Michigan, but none of them had anything even remotely close to what I was looking for. We had boked a trip to Chicago for my birthday on January 27th, and I held off on buying something else because I assumed my fabric of choice would magically appear at one of the big city fabric stores I planned to visit. It didn't. 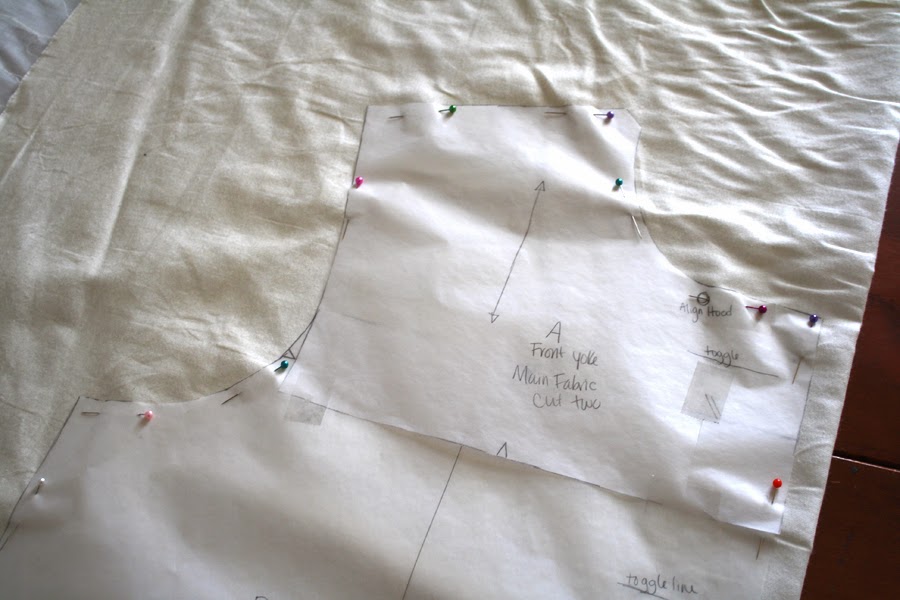 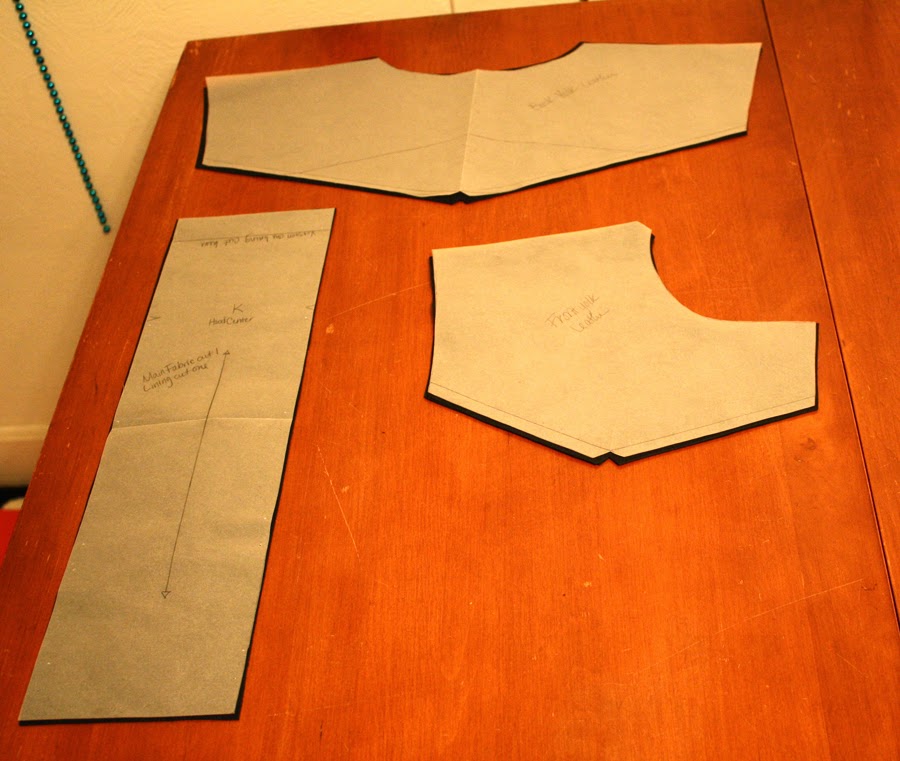 It took me two days of searching the internet when I got home to find the pattern and fiber content I wanted at a price point I could afford. When I finally found a five yard cut on Ebay for $50 I then had to wait almost a week for it to arrive in the mail. When it showed up it was barely half as thick as I had hoped, and was riddled with imperfections and snags that had to be carefully navigated when I cut out the exterior pieces of the coat. I also had to go back to the local fabric shop again to purchase interfacing and interlining fabrics to help stabilize and insulate what would later be my finished garment. 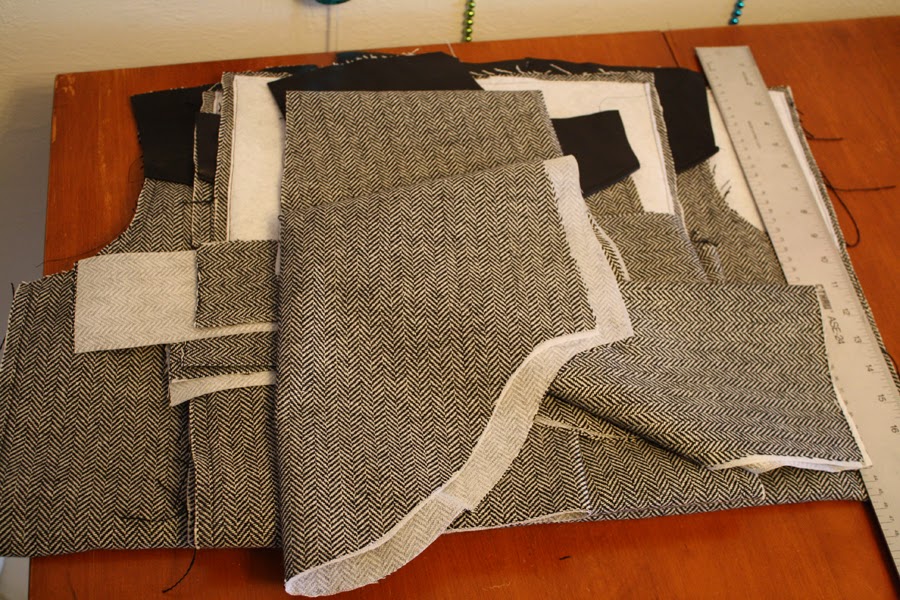 When I finally had all of the fabrics and thread I was going to need (including two leather pairs of pants and a leather coat that needed to be ripped apart at the seams and disected into useable pieces) I got sick, really sick, and on top of maintaining a solid 40 hours a week at my day job 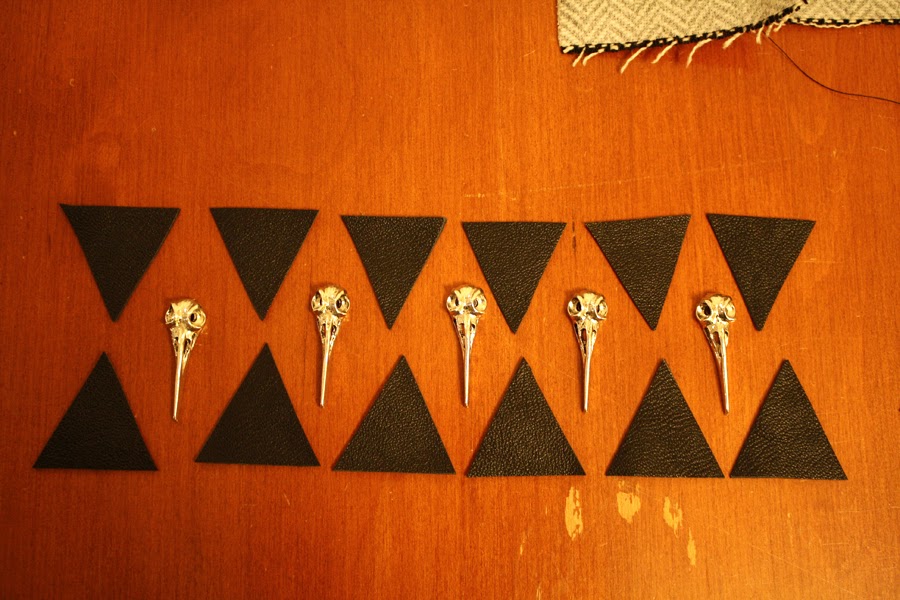 By the time I had free hours in my day and was well enough to start my garment it was two days after Valentines day, and the sewalong had officially started on January 23rd. I went down to my home office to print my digital copy of the pattern only to find out that I was out of ink, and somehow having avoided the modern world for this long, I didn't have a thumb drive to transport my pattern to the print shop. It took a trip to three different stores to find a thumb drive, and a stop back at the house before I could make my way to the Kinkos print show all the way on the other side of town. 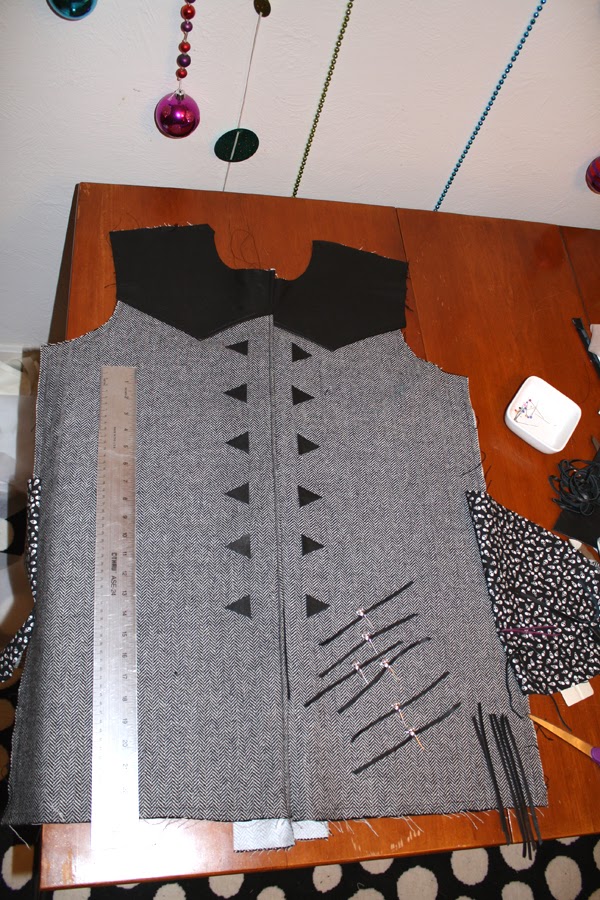 When I got to kinkos I realized I had two print options, I could either have 80+ 8 1/2 by 11 sheets of paper that would have to be carefully trimmed and taped together for $8.00, or I could have it printed on large format blueprint paper for $25. That $25 fee was twice what I originally paid for the digital pattern, but I didn't want to waste more time taping so many separate pieces, so I shelled out the extra money. When the helpful kinkos employee came back to the counter with my large format print, he looked worried and went back to look at the pattern files he had open on his computer. He then proceeded to tell me that he had made a mistake. The pattern PDF was formatted for 40 inch paper. The printer at my kinkos only had 38 inch paper, and the printer had shrunk the image to fit. This left me with either the 8 1/2 by 11 sheets, or paying $50 for the large format print on two sheets (the charge is by the square foot) plus a $20 processing fee for the employee to reformat it for two sheets. I went home with the huge stack of letter sized sheets, and the mis-scaled large sheet that the employee was kind enough to throw in for free since he would have had to throw it out anyway. 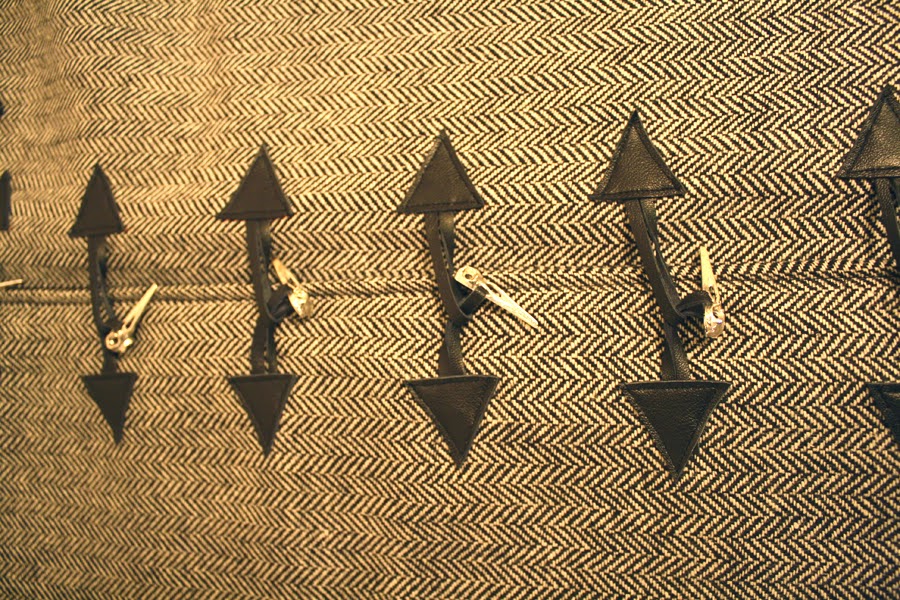 When I got home I spent over an hour doing math and measuring with Mr. Mammoth to determine that I could still use the large format version if I used the shrunken size large instead of the medium he needed at full scale. At the end of work day one, I had a functioning pattern, but nothing cut out. 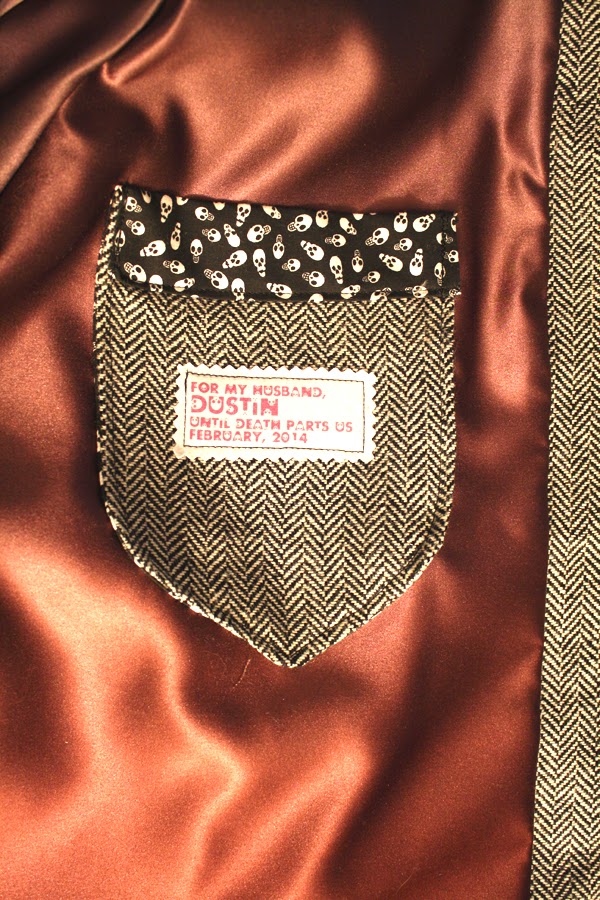 For the next three days I spent my free time before and after work tracing off and cutting out pattern pieces, and making design and fit adjustments. I wanted all of the design details in my coat to mimic the V shapes in the herringbone pattern of my outer fabric, so I made some pretty major design changes. I got rid of the separated yolk pieces that came with the pattern and drafted my own front and back yolks that would mimic the sort of details that a western shirt has. I drafted pointed 'gauntlet' sleeve covers and a whole new sleeve pattern since the original seaming would have looked too cluttered with the leather detailing I was adding. While I was at it I elongated the sleeve since the pattern sleeve was too short. When all of my pieces were ready I spent all of the following day outside of work laying out, pinning, and cutting all of my pieces. This also included gutting two pairs of leather pants and a leather coat so that the center exterior hood piece, sleeve caps, and leather toggles could be made from real leather. 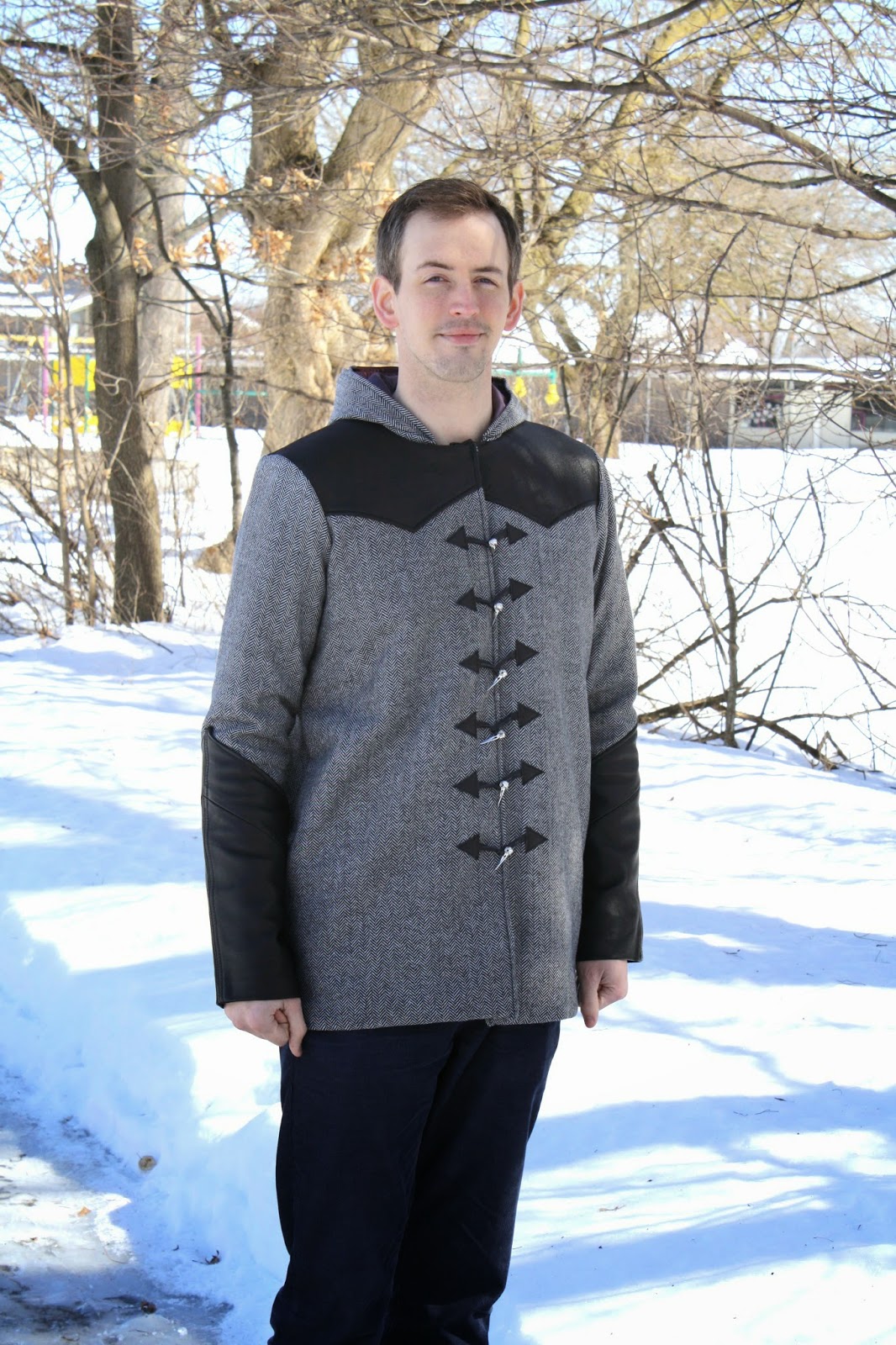 I decided I didn't like how large and square the in-seam pockets were, and I thought the exterior front pockets would look too cluttered with my other design details. I re-shaped the inseam pockets to the standard kidney shaped pockets that most garments have, and cut them out of a small remnant I had saved of a miniature skull print on sturdy cotton. Since I know my husband likes a lot of pocket space, and I had eliminated the front pockets, I drafted to interior breast pockets out of the remaining scraps of herringbone wool and lined them with the skull print as well. I used printable fabric sheets and downloaded a skull font from dafont to make a custom tag that would mimic the overall theme. The text is in purple ink to match the purple lining of the coat. 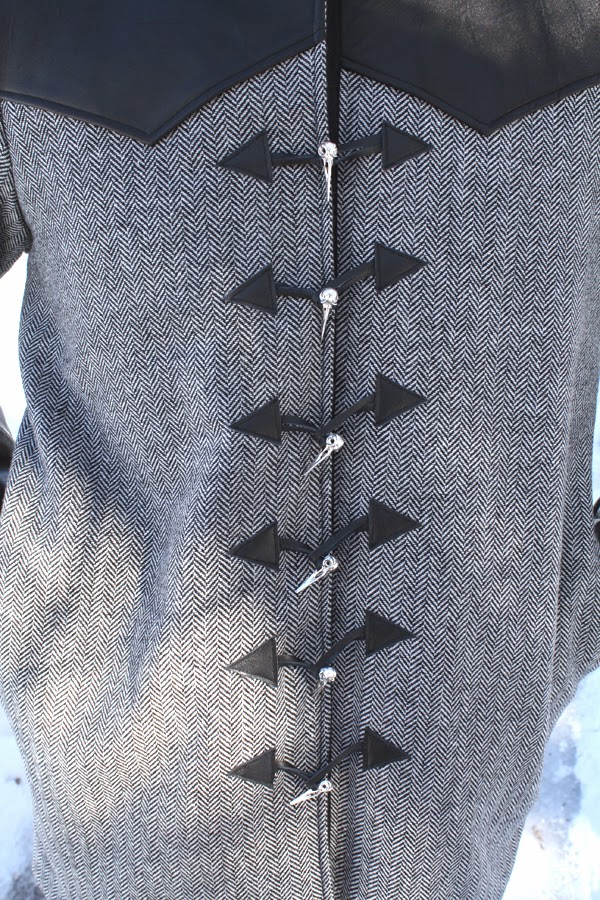 I knew before I even started the coat that I wanted to use cast metal hummingbird skulls for my toggles. I purchased a set of six on etsy, and then had to cut off and file down the loops that they had to make them pendants. I carefully cut thin strips of leather and used tweezers to pull the strips through the center of the skulls. Since I was keeping my V shaped themes in mind, I cut triangles for my toggle mounts instead of the traditional half circles. I used six toggles instead of four, since my toggles were a bit smaller than standard, and installed a zipper in the coat as well to make sure it would stay firmly closed. 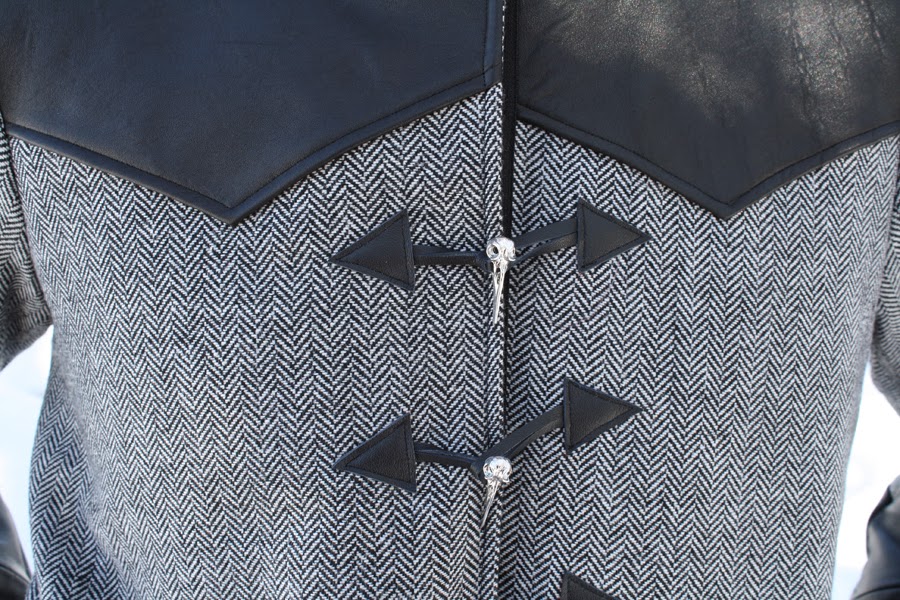 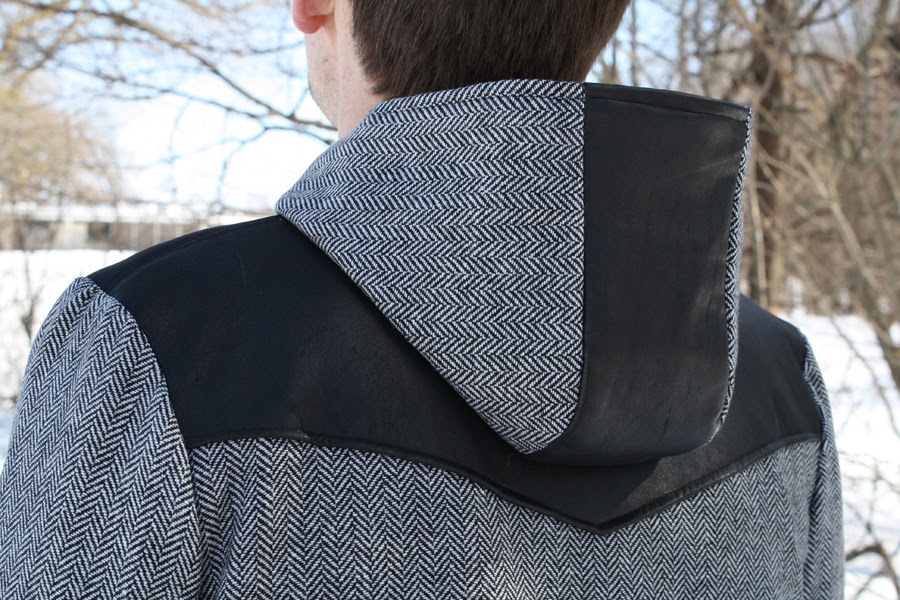 The coat itself is liked in a heavy weight poly blend sateen in purple ombre. I wanted to line it with something that would slide easily when trying to take the coat on and off, and since I had added interlining I didn't need to be concerned with using a 'warm' fabric for the lining. For finishing, I hand stitched the hem, because I wanted a clean look, and added a small hidden black snap at the top of the zipper to make sure the top of the coat laid flat, and so I didn't have to use the tab closure, which I thought might look too busy with my other design details. 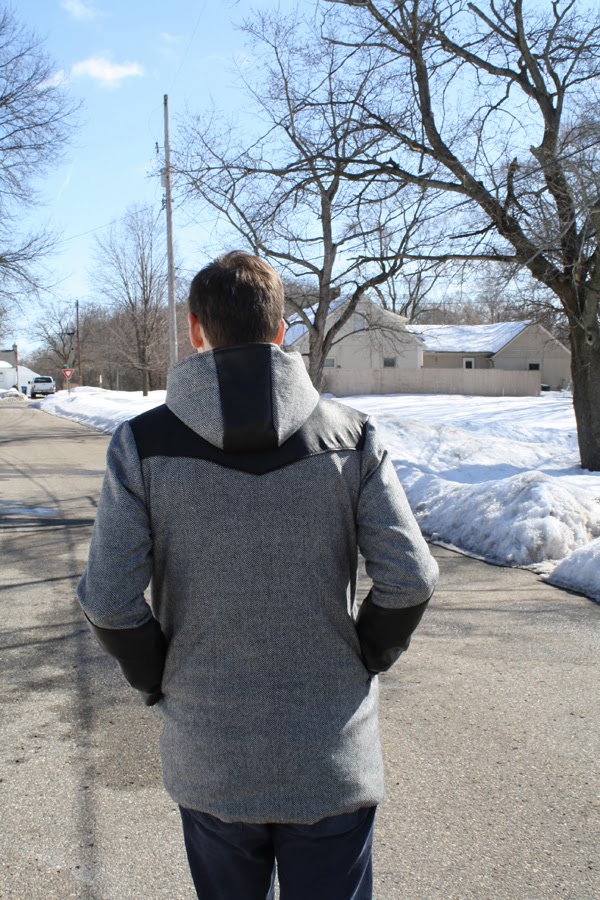 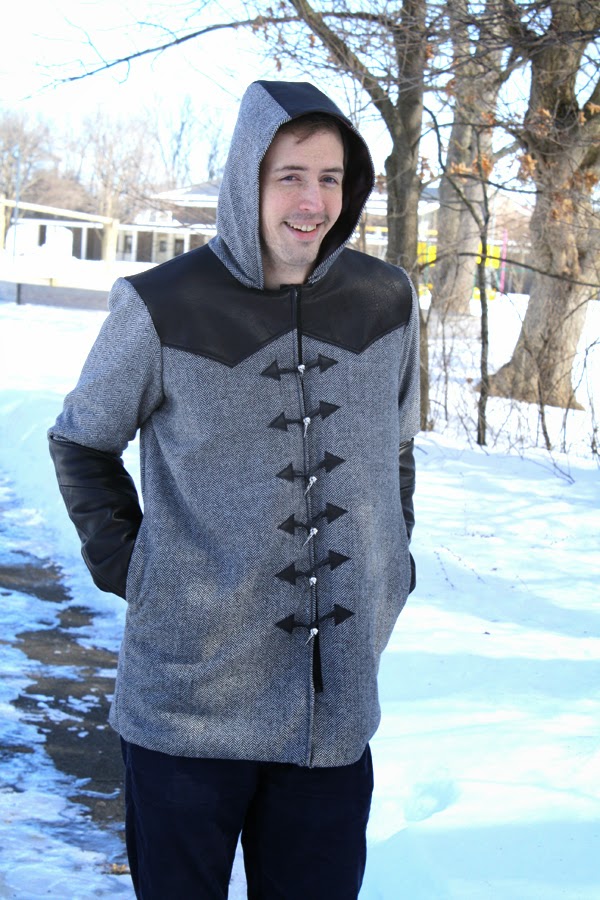 This is the first time I have worked with real leather, and the first time I have ever made a coat. My last day off before the deadline was February 19th, and I worked for 16 hours straight that day to finish everything. Since I had made so many pattern modifications, it became somewhat impossible to follow the sewalong, and I had to do a lot of things on my own that I've never attempted before. With the exception of a few small areas that I wish I had done better, I feel REALLY pleased with my end result. This coat is true to my own aesthetic, and my husband loves it. Fingers crossed that it will earn me a new Bernina! 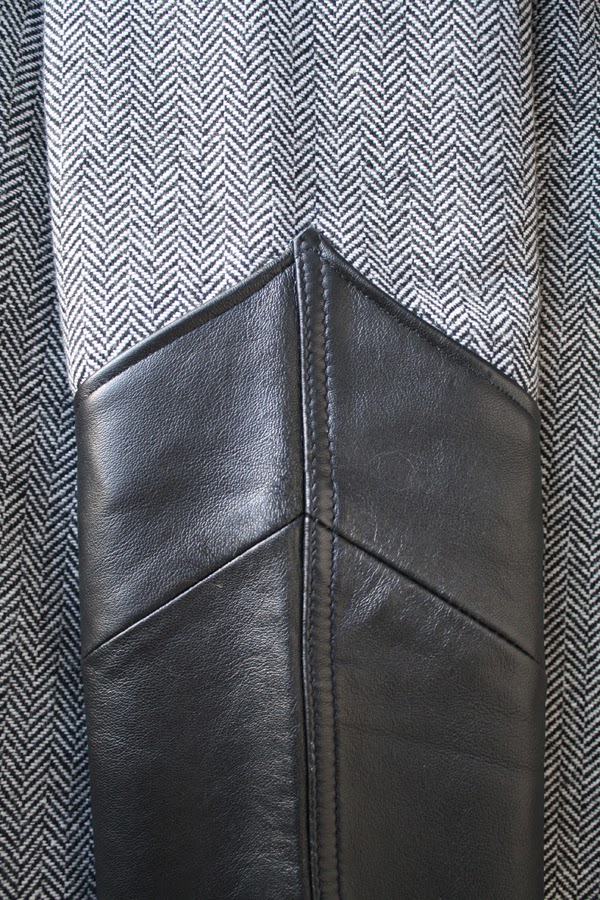 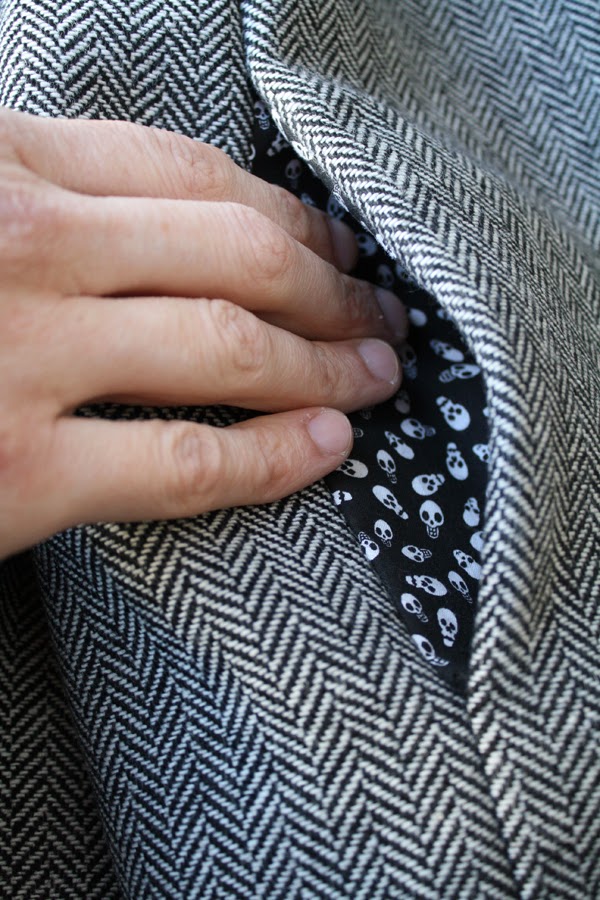 Just for good measure, here are a few more photos of the lining. I'm really pleased with how the ombre purple satin looks on the inside! 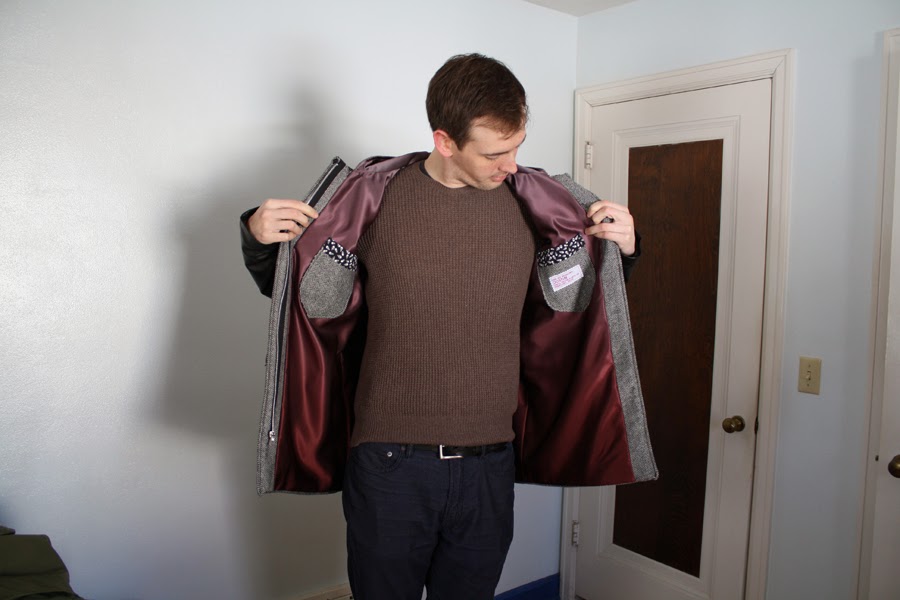 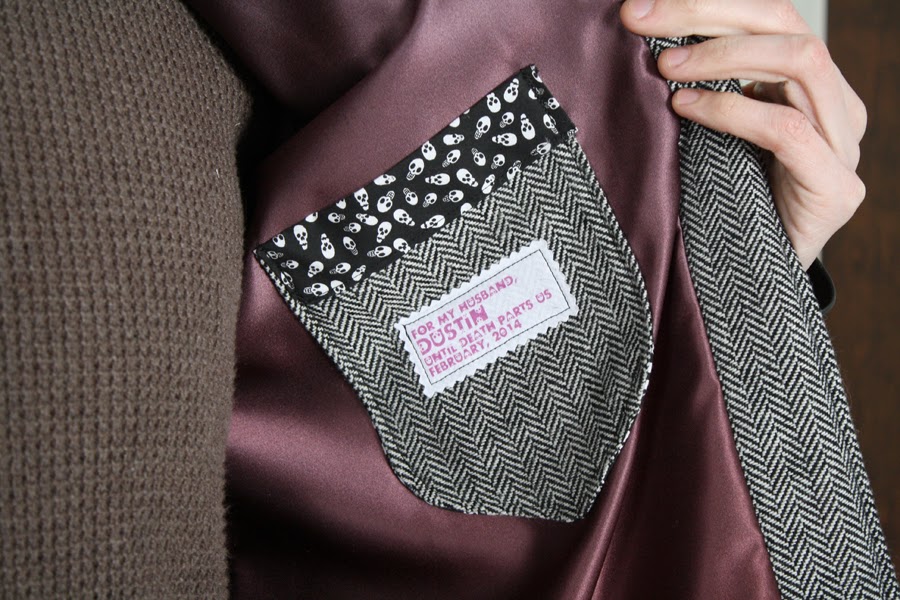 Close up of the custom tag detail. 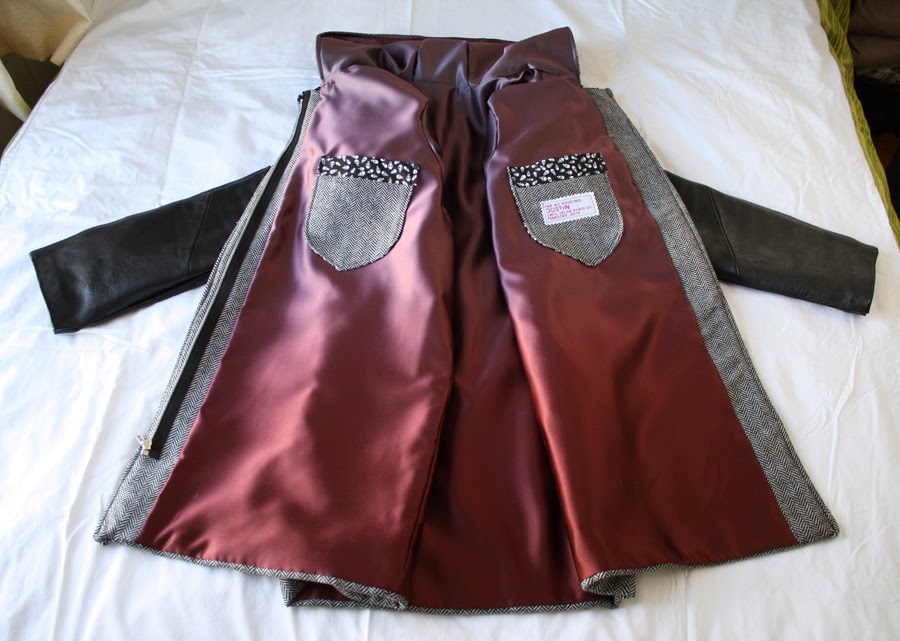 I would highly suggest using any of the patterns from Colette Patterns They have fantastic directions, and really great web support if you follow their blog or the new sewalongs Facebook group!