Finally, the post you've all been waiting for; the one about the wedding dress! In its completed form, it was made from  creamy white 100% Ultra-fine Italian Merino wool. It was gloriously lightweight and breathable, with a natural two-directional stretch that helped it lay nicely, not wrinkle at all, and hug in the bust area where I needed good fit.

It was lined with the 100% silk that I had originally intended to make the entire piece out of, but had too many problems with (see previous dress post for details). It had built in pockets so that I could carry the 1921 silver dollar my Great Grandfather carried in his pocket on his wedding day. I hand braided the straps out of a thin strand of mesh, and two strips of beautiful 1/8 inch silk ribbon in the same shade as the dress.

Our wonderful photographer friend, Casey Spring was kind enough to shoot some photos of me in the dress before it was painted. In the pictures you can see it both loose, and bustled. I will post soon with photos of the original paint sketches, and the final, painted dress!

I had every intention of writing a foodie Friday post to talk about all of the tasty things we ate this week, but I went to see Moonrise Kingdom instead (totally worth it, will probably be my favorite movie for the rest of forever). It also might have been fortuitous that I held off on the food post since I was trolling around on Craigslist today and found a listing for a batch of '50-100 cookbooks, recipes' for $15. I could tell by the two books on the top of the stacks in the photo that I wanted the lot even if those were the only two keepers. Dustin drove me out to Oshtemo to pick them up, and it turned out to be an insane treasure trove of cookbooks and pamphlets from 1930-1970, with essentially all of them in mint condition! Check it out: 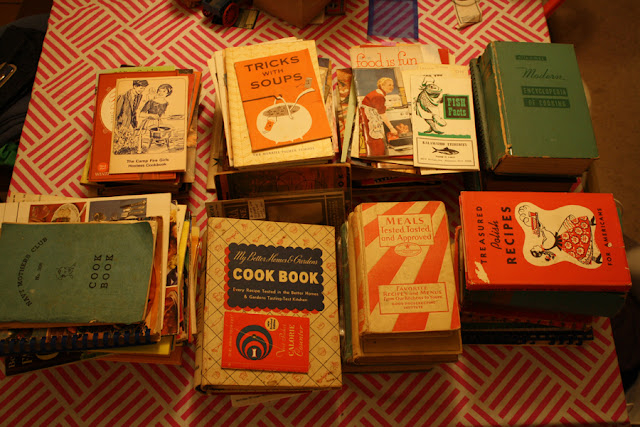 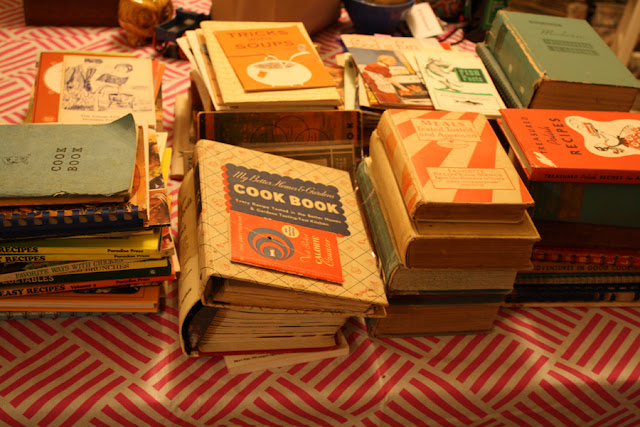 Our road trip honeymoon turned out to be pretty much an eating tour of the East coast, and we ended up eating several things that I couldn't wait to try recreating at home. The first few days home it was too hot to use the oven or grill outside, so I started us off with a curried chicken salad in romaine heart boats.

I started by boiling and shredding chicken breasts then added curry powder, sea salt and black pepper, dill, and the smallest amount of mayo possible to make it all stick together. 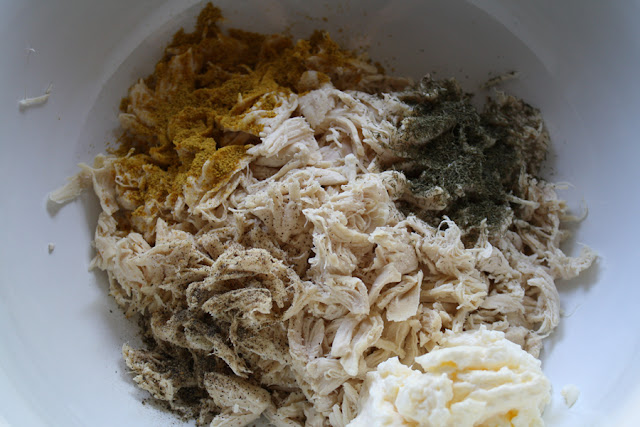 When we were in Cleveland we went to one of our favorite places EVER, Yeleseyevski deli in Lyndhurst. They stock Ukranian, Russian, Polish, etc. imported and novelty foods, and I bought a box of these really fantastic fat and juicy golden raisins with wonderful flavor. So I tossed in a handful of those, and about a 1/4 cup of slivered almonds for some crunch.
And then spread it into the romaine heart leaves and served it up to Mr. Mammoth, who was totally impressed with his new wife's cooking prowess! :-)
Our favorite stop of the Honeymoon was our last night, which we spent in Bethesda, Maryland. In case you haven't been there its a super rad town, that's easy to walk around with lots of fantastic restaurants and cool little shops (I will post soon about a cool little boutique I found there as well). We specifically went to Bethesda so I could take Mr. Mammoth to a restaurant owned by the son of one of my dad's business associates. It's called Redwood, and both times I've been there the food I ate surpassed any other meal I've had, along with great atmosphere (most of the inside is made of redwood wood, along with stylish modern stone).

One of the appetizers we had at Redwood was an amazing cold corn soup. It appeared to be pureed raw sweet corn, and was topped with an amazing salsa of sorts made of tomatoes, cucumbers, and WATERMELON. I swear to you, it is totally worth it to drive to Maryland just so you can eat this soup.  We also ate a roasted beet and goat cheese salad that I had last time I ate at Redwood, and our entrees were a grilled steak on baby spinach salad with blue cheese and chestnuts, and the most amazing piece of salmon I have ever tasted atop a lush bed of fresh pea puree. I am really sad to say we didn't take any pictures of our meal, we were too busy trying to look classy.

The first day we were home I attempted to re-create the soup by pureeing fresh corn in our fancy new belle blender, adding a little bit of 2% milk, and then topping it with Michigan made Garden Fresh salsa. It was delicious  and refreshing since it was 106 degrees outside that day, but it still made me long for another bowl of the Redwood version. I am fairly certain they must have strained their soup, as it was smooth and silky while mine had a grainy texture from the hulls on the corn kernels, and I wish I had made my own salsa with watermelon. 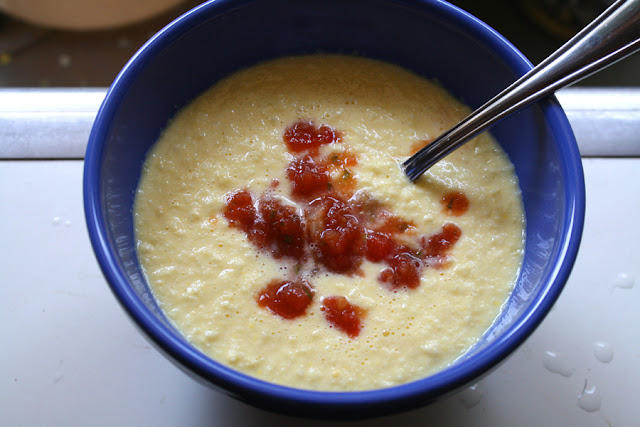 So Mr. Mammoth and I are officially married, and have arrived back at Mammoth Manor after our winding roadtrip honeymoon. You can expect lots of posts about wedding crafts and roadtrip shenanigans in the next few weeks, but for today I have exciting news on the home front!

Right before the wedding, one of the bridesmaids and I hit up the neighborhood garage sales in the Historic Stuart Neighborhood of Kalamazoo. Since the houses there are mostly victorian and their owners tend to be swanky, it's usually a good bet for finding some awesome vintage treats. I ended up not making very many purchases, but at one of my first stops I rummaged through a huge pile of vintage die-cut decorations that must have come out of an elementary school classroom. Imagine my joy when I unearthed an entire set of circus die cuts at the bottom of the pile, and then had the guy running the sale give them away to me free of charge!

They hung on our dining room wall during the week of the wedding, and when I came home, I saw them and got inspired. After a quick trip to the fabric store and the use of my swanky new printer-scanner-copier machine, I cranked out what is soon to be a full line of vintage inspired circus pillows! Check out the first three: 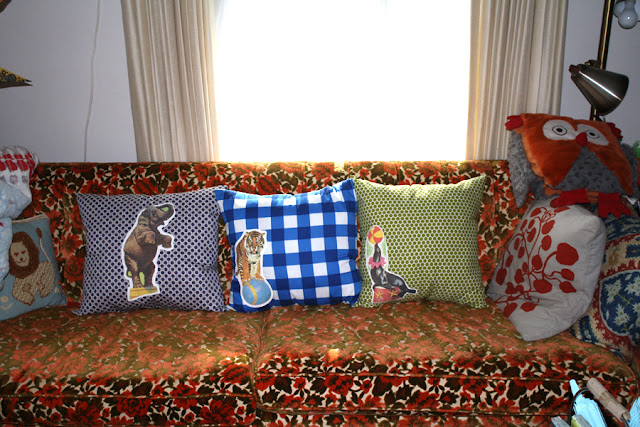 The images are printed onto white cotton canvas transfer paper, and then appliqued onto the cotton fabric of the pillows. Here's the close-ups:


The tiger is totally my favorite, but I can't wait to make more of them. Hopefully they will be available in the WoollyMammothDesign Etsy shop in a couple of days.

In other news, its really hot here. REALLY HOT. Michigan is breaking heat records all over the place this week, and my really long hair was not making me happy. People who have known me for years know that I have only had long hair twice in my life. When I first met Mr. Mammoth 3 years ago, I had the same haircut he has now, which is about 2 inches long, and even shorter than that in some places.

I really only grew my hair out this time so I would look extra purty and somewhat more feminine than usual in wedding photos, and had planned on hacking it all off immediately after the wedding (possibly even before the reception!). But once the wedding was over I all of a sudden had pangs of fear about cutting off three years of growth. If you're curious about the length, scroll down a few posts to the one with the bridesmaid clutches, and add two inches.

Heat has a way of ridding me of attachments to long hair; I called the salon at noon today, and walked out at 3:30 looking like this:

In case you haven't  had such an experience, Pica is here to let you know that sneak-attack puppy licks are the best way to stay cool. 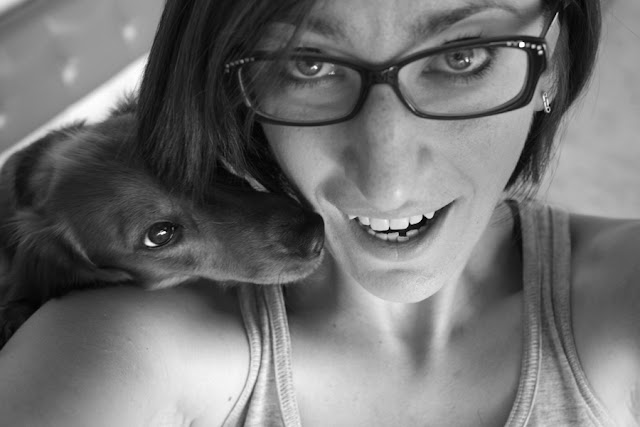